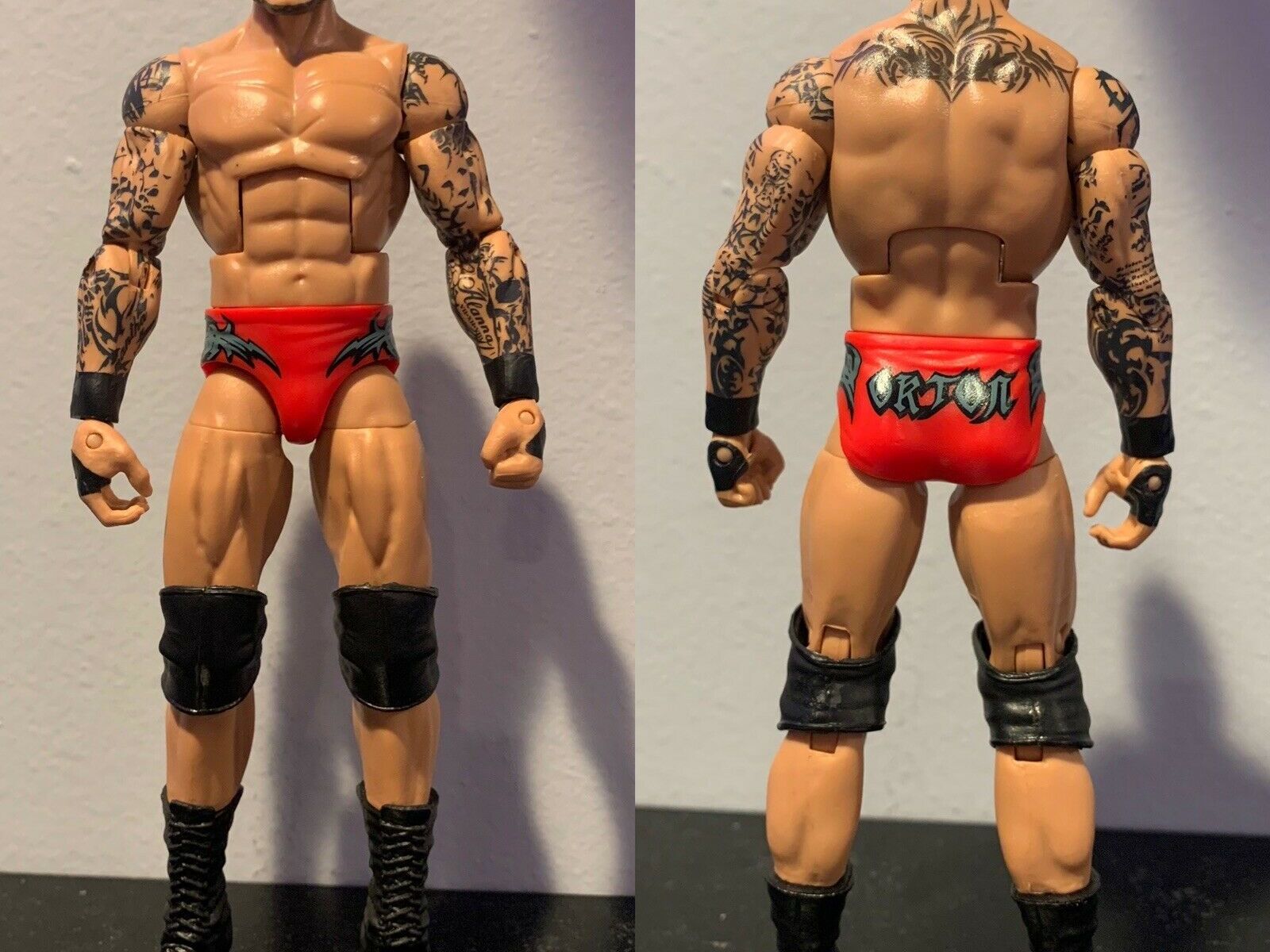 The description for the Orton figure read: “Legitimately only one in the world. This is legit as it gets. No decals were used, no paint, completely factory made. I tried to get as many angles as possible to show its authenticity.”

Ladies and gentlemen, I have something very cool for you. I won this Randy Orton on auction the other day on eBay, and I believe this is an Unreleased, never before seen figure. This figure is based off his Wrestlemania 31 attire. I have been doing customs for years and worked with paints, decals, etc. and I can assure you, this isn’t a custom. The red base color trunks hasn’t been used before and most certainly isn’t painted on. That’s the dead giveaway. It’s a pretty badass one of a kind piece. I’d love to hear more info if anyone happens to have any info. Please let me know what you guys think, thank you! He is for sale, link in bio!!

Meanwhile, the auction for Styles read: “This is the real deal. Genuinely only one in the world. None of these have ever popped up before. Amazing collection grail piece. This is not a custom, no decal work, nothing. Once you hold in hand and look closely you can tell how this is actually manufactured and legit.”

Ladies and gentlemen, there were talks about it that there was an unreleased AJ Styles lurking somewhere and here it finally is! The Unreleased AJ Styles Elite figure in his Money in the Bank 2016 attire when he fought John Cena. Holding this figure in hand is freaking awesome. It’s a genuine One of a Kind piece. An absolute grail. I’ve worked with decals before and I can assure you no decals or customization has been done to this figure. It is the real deal. Absolutely awesome to own this. Let me know what you guys think, thank you!

What made Figured_Photography confident that these figures are legit?

“You can mainly tell by the base color of the trunks and how it is the real deal, as well as when you look at the logos you can see it’s real and do the scratch off test to see if it’ll come off to see if it was decals and nothing,” he told Wrestling Figure News.

Although the auction for Orton ended at $405, Wrestling Figure News has learned that the eBay buyer never paid and Figured_Photography ended up selling the figure offline to another collector, Anonymous_Figurecollector.

Anonymous_Figurecollector had already purchased what he believed to be an unreleased Elite Rusev (aka Miro) in his SummerSlam 2015 attire on eBay from the same seller who originally listed the Orton and Styles figures.

“Once I received the Rusev, I knew it was legit,” Anonymous_Figurecollector told Wrestling Figure News. “There were no paint streaks and the lines were incredibly clean. I looked at the feet and there was some markings on it that were unfortunately smeared off and there was also no serial number on the figure like there is on all the figs.”

I bought this Rusev on eBay from someone that was selling a bunch of figures and there was 3 figures that never been produced before. I ended up winning this one and shoutout to @wwefigurehunter for sharing the listing with me. I don’t think it’s a custom because the lining and details on it look factory made and they aren’t decals. What do you think it is comment below and tell me your thoughts. – – – – – – – – – – – – – – – – – – – – – – – #wwe #wwemattel #mattel #wrestlingfigures #wweelitesquad #scratchthatfigureitch #rusev #smackdown #raw @majorwfpod @billmiekina @tobemiro

Having the Rusev in hand, Anonymous_Figurecollector was confident that the Orton figure was also legit, since all three figures were sold by the same eBay seller (Rusev, Orton, Styles).

“I make customs and have both done hand painted and decals to make figures and the logos on the trunks are way too perfect to be a custom,” Anonymous_Figurecollector told Wrestling Figure News. “If decals were used there would be an outline or wrinkles in the decals. Also for the Randy Orton, no other figure has that color of trunks that shade and brightness and it’s molded throughout.”

Anonymous_Figurecollector added that he cut a deal for the figure at a slight discount from the eBay sale price.

So where would these figures fit within the Elite line? With the Orton and Rusev figures based on attires from WrestleMania 31 and SummerSlam in 2015, the figures likely would have been released in 2016. They could have been a part of canceled build-a-figure or store exclusive waves.

According to Figured_Photography, Styles was likely earmarked for a 3-pack with Luke Gallows and Karl Anderson.

If you have more details on the origins of these figures, please reach out to me on Instagram. @WrestlingDelorean85.