The Spanish God could soon be immortalized in the AEW Unrivaled line.

Jazwares partner Jeremy Padawer discussed the AEW Unrivaled line with Aubrey Edwards and Tony Schiavone on today’s AEW Unrestricted podcast, and he teased an appearance by Sammy Guevara “soon” in the line when asked about wave 3.

Three spots in the six-figure wave three lineup are already known: Darby Allin (who also has a 1 in 500 chase figure), Pac and Orange Cassidy. Padawer said an announcement on the full lineup is coming soon.

Additionally, Padawer said more titles are on the way, and Jazwares is discussing adding diecast and pleather championship belts to the line.

“We’re not only thinking about doing more belts, but we want to do them in various ways that are super special and make the fans excited and make the talent excited,” he said.

Here are notes from Padawer’s conversation, in particular, the Q&A, which starts at the 35:36 mark:

More Women’s Figures are On the Way

Women’s figures will be a bigger part of the AEW Unrivaled line moving forward, and they will be featured in the main line of figures, as well as limited edition figures, exclusives and 2-packs.

“Women will not be overlooked in this line,” Padawer promised.

The Goals of the AEW Unrivaled Line

The goal is to have multiple offerings, whether that be single figures, 2-packs and a presence in the grocery and food channel.

Following the first two waves, future waves will be treated like macro economics, with an eye on supply and demand, Padawer explained. The lineup will feature main event level talent, mid-card wrestlers and opening match workers. Those slots are fluid and can change given pushes, he admitted.

By not overproducing mid-card and bottom of the card talent, toy makers can manage the supply and make them exciting to the end consumer, Padawer added.

That approach will lead to people like Edwards, Schiavone and other refs, officials and commentators to be featured in the line.

Over time, Jazwares will look to release an 18×18 medium-scale ring.

An entrance stage is also possible and “pretty easy,” but he said they “probably won’t do a big plastic slab that costs you a fortune to buy.” There are ways to give collectors what they want through other materials.

Padawer admitted that he didn’t do a great job at scaling figures by height and size in the past, but it is a focus moving forward. So characters such as Marko Stunt will be more representative of their actual size. 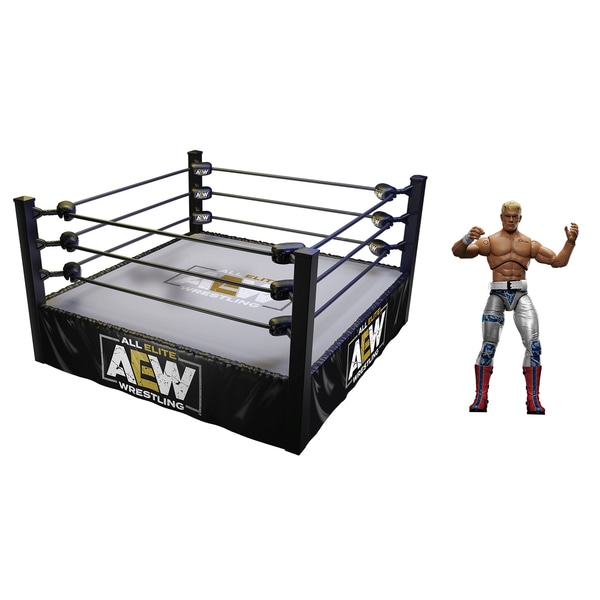 The AEW line will be coming to Smyths Toy Stores in the United Kingdom later this year.

As previously reported, the UK will also be receiving an exclusive Cody Rhodes figure and ring combo.