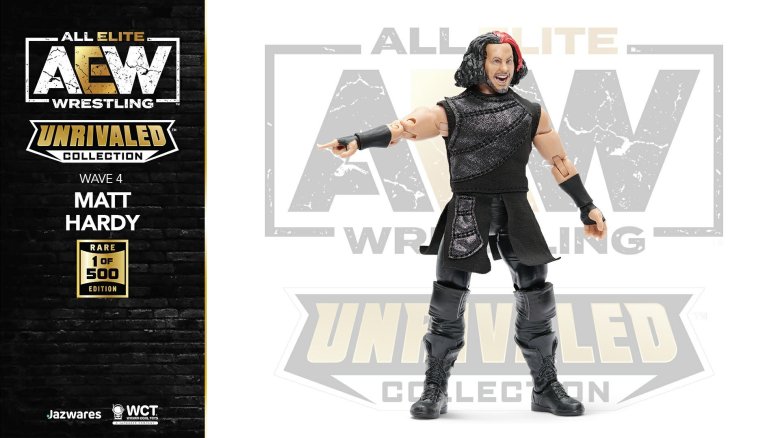 Matt Hardy is the 1-of-500 rare figure in the fourth wave of AEW Unrivaled action figures.

The Broken One was revealed during a wave of reveals today from Jazwares partner Jeremy Padawer.

Those reveals included the 1-of-1,000 Cody Rhodes chase figure, which includes the American Nightmare neck tattoo.

In fact, Padawer promised that this would be the last Cody Rhodes figure manufactured before Britt Baker receives a figure.

This is the last @CodyRhodes and Pharaoh that we will manufacture before a @RealBrittBaker is launched. The Unrivaled @CodyRhodes chase series 4. Limited to 1000. @AEW @GM_Toy_Dork

We hear you. We want more of you to be able to get your hands on chase and rare. Starting in a few waves, we will increase the chase and rare numbers to 5,000 and 3,000 units.@AEW @Jazwares

Padawer began revealing the official photos in the wave Wednesday afternoon. First up was Kenny Omega. Second up, Cody Rhodes in Fyter Fest 2019 gear. Both feature updated head scans that are major improvements over the first wave of figures.

Sammy Guevara in his gear from the debut edition of AEW Dynamite followed. Guevara was the first figure known in the wave.

The six figures in the set — Santana, Ortiz, Kenny Omega, Cody Rhodes, Matt Hardy and Sammy Guevara — are available individually at Ringside Collectibles with a shipping date of mid- to late-April, as of this writing. They range in price from $25.99 to $27.99 each.